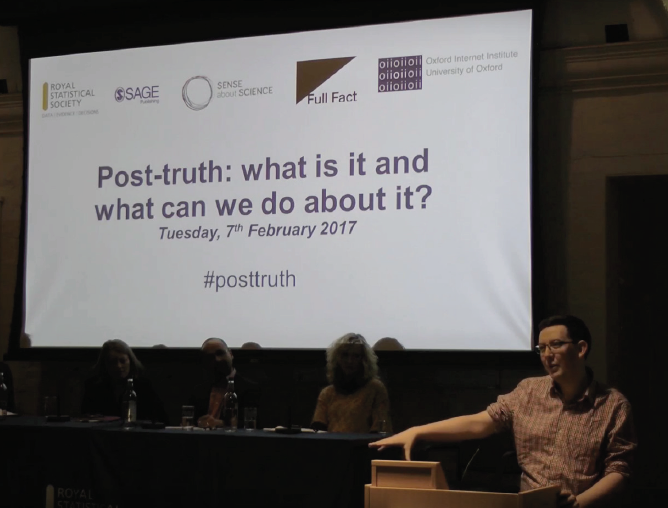 THAT was one of the questions posed at a recent panel discussion hosted by the Royal Statistical Society to consider whether we really are in a post-truth world of ‘alternative facts’, and if so what we can do about it.

These terms have become commonplace as people try to make sense of a global political landscape that looks and feels different to what many would have predicted a year ago. So it was refreshing to hear a more critical take on the concepts such as post-truth, fake news and echo-chambers.

That isn’t to say that the panellists thought all is well. It was accepted that misinformation, ‘fake news’, and a lack of regard for evidence in some quarters are issues worthy of addressing, and that it’s vital for the health of our democracy that we do so. What’s more, Helen Margetts (Oxford Internet Institute) presented a compelling case that the Internet and social media may be exacerbating the problem.

“Is anything particularly new about the challenges we face in defending the importance of facts and evidence?”

What was questioned was the notion that there is anything particularly new about the challenges we face in defending the importance of facts and evidence.

Or, to restate the earlier question – against what previous golden age of ‘truth’ are we implicitly comparing our modern era to when we use the phrase ‘post-truth’?

This sense of perspective is welcome. William Davies’ recent piece in the Guardian, which has generated much discussion in the statistical world, painted a gloomy picture of the supposedly waning power of statistics. But as the National Statistician pointed out in response, our supposedly ‘post-truth’ era is also characterised by both a yearning for more trustworthy analysis to make sense of the world and an abundance of data out there to help inform it, if only we can tap into and make sense of it.

And that is central to our mission here at the Office for National Statistics. We are constantly striving to produce better statistics to support better decisions. We have ambitious plans to harness big data and exploit its potential to help us understand the modern world. And we are always looking to better understand current and future user needs and respond to them where we can.

“We will continue to champion the value of evidence and statistics, even in our supposedly post-truth world.”

It’s not just about producing better statistics, however. There are challenges in explaining to a wide audience what the evidence says about any given issue when the matter at hand is complex, the evidence is not always clear cut, and the methodological limitations of statistics need to be made clear in the name of transparency.

The difficulty with that, as panellist James Bell from Buzzfeed explained, is that when it comes to dealing with a mass audience and a controversial issue, a simple and clear message usually beats a complex one.

Those of us working in the field of official statistics always need to challenge ourselves to communicate better and in a way that is clear and accessible. But we cannot get away from the fact that by necessity we deal in complexity and nuance, which can make it tricky to get our message across where others may be peddling a simpler line and in a louder voice.

The answer, as argued by Full Fact’s Will Moy, lies in recognising that the ONS and UK Statistics Authority, along with other bodies such as new Office for Statistics Regulation, are part of a bigger picture including civil society groups, media outlets, businesses and ordinary citizens. Working together is crucial to help people make sense of the world around them, to continue to build the case for evidence, and to challenge those who wilfully misuse or disregard it.

That’s why, for example, the UK Statistics Authority is partnering with Full Fact, the House of Commons Library and the Economic and Social Research Council on the ‘Need to Know’ project. And it’s also why the work done by organisations such as the Royal Statistical Society to improve statistical literacy is so valuable, so we can all understand the importance of evidence and challenge its misuse.

Responding to Mr Davies’ Guardian piece, the National Statistician argued that “this is the moment when we can make our greatest contribution to society” by seizing the opportunities open to us to produce the statistics that Britain needs to answer the big questions of the day. That’s something we certainly intend to do. And working with others, we will continue to champion the value of evidence and statistics, even in our supposedly post-truth world.