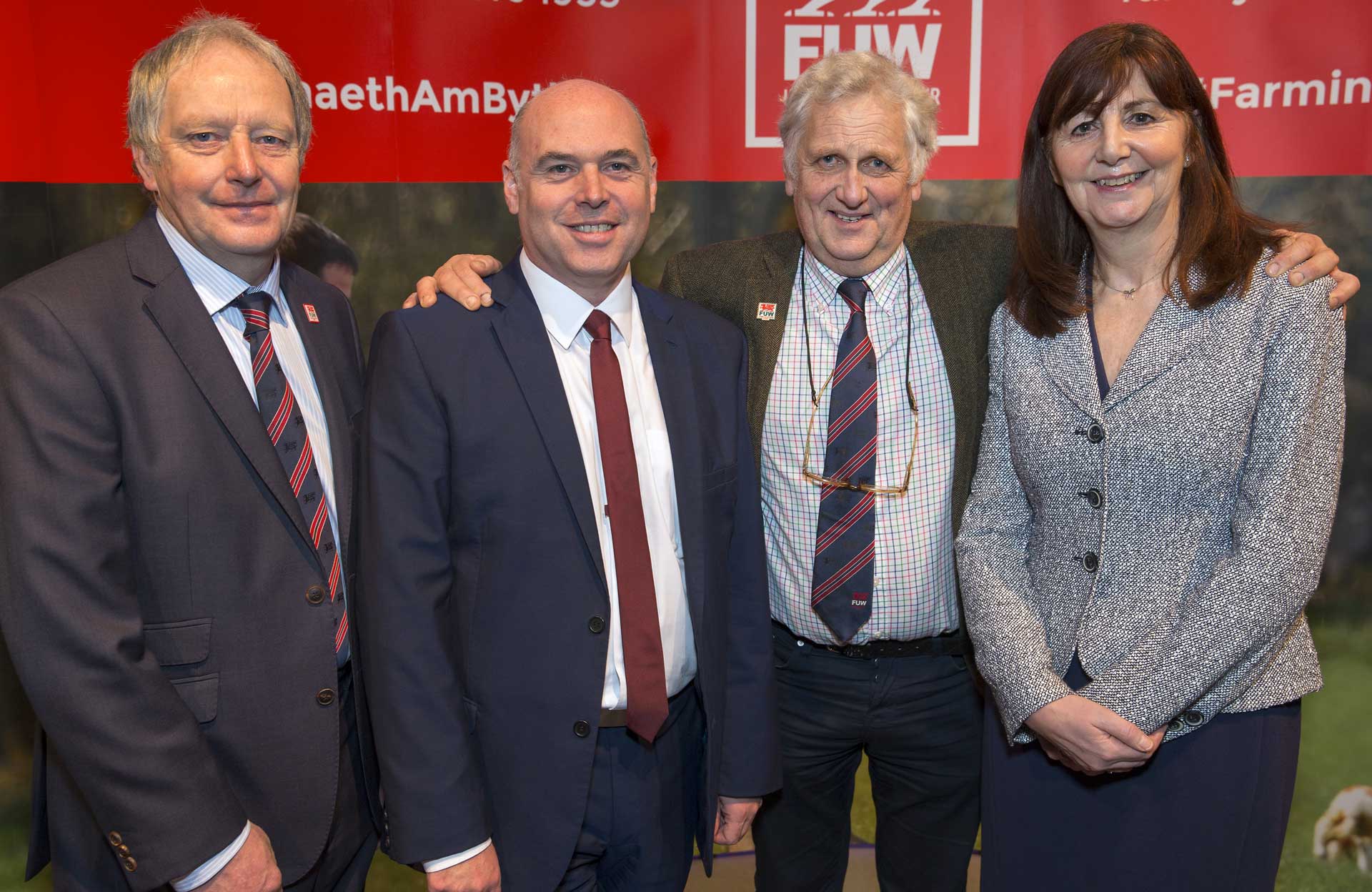 ASSEMBLY ​MEMBERS and key stakeholders, who joined the Farmers’ Union of Wales (FUW) at its annual farmhouse breakfast in Cardiff on Tuesday (Jan 23) heard how the Union has established three working groups to demonstrate the positive impact that the farming sector has on delivering the goals of the Wellbeing of Future Generations Act.

Speaking at the breakfast, FUW President Glyn Roberts said: “Those of you familiar with the FUW will know that we pride ourselves on being a grassroots organisation which provides a voice for Welsh farmers, and Welsh farmers alone. We also like to think that we are an organisation that makes maximum use of data and analysis. Evidenced based decision making as it’s known.

“Therefore I am pleased to announce today that in line with these principles we have established three focus groups which will look at identifying strengths, weaknesses and opportunities for our key sectors based on the detailed annual breakdowns of farm costs and outputs provided by Aberystwyth University’s Farm Business Survey.”

This approach, Mr Roberts said, won’t be building a policy purely around high level principles but instead will look at ways to determine the Wellbeing of Welsh family farms by placing their business incomes at the heart of policies which deliver a host of benefits to society.

“The farmers of Wales already play a significant role in delivering all seven of the ‘well-being goals’ defined in the Well-being of Future Generations Act and our work will provide the evidence to substantiate this and of course the continued investment in Welsh agriculture and Welsh farms.

“Whether it is the FUW, Welsh Government or others who are looking at future policies, the work – including the welcome and forward-looking work of the Welsh Government’s round-table sub groups – is overshadowed by uncertainty.”

Mr Roberts stressed that there is no doubt that as an industry we will still be here in decades to come, but Brexit means the industry now stands at a crossroads where a wrong turn based on poorly thought out or poorly investigated decisions would jeopardise not only thousands of farm businesses, but a large number of those other businesses and employees which rely on the agricultural industry.

“Despite the size of the challenge and that we face this challenge for the first time, I’ve been amazed at how many Brexit experts there are in this country. There appears to be no end to those willing to give advice on which direction we should take. Much of this advice is of course very well meaning, but a lot of it is delivered with a dose of self-interest,” said the Union President.

The FUW has long stressed that family farms in Wales are key links in innumerable supply chains and the backbone of our rural economies: they not only deliver food, but also environmental, tourism, renewable energy and other benefits to name just a few.

“Our family farms provide services worth many times more than the value of the support they receive, delivering rural employment, payments to other businesses, food production, and a host of other social and environmental services.

“And each of those services represent a supply chain – some which work well, but many others which do not – so we now have the opportunity, through a new approach, to look at their entire lengths, and make them function properly. Or, where this is not possible, or not politically desirable, we have an opportunity to put in better mechanisms to make up for market failures,” said Glyn Roberts.

Mr Roberts stressed that he did not mean a farming policy or an environmental policy, but supply chain policies, which ensure equity, fairness and just rewards along the whole length of those chains, whether they relate to the supply of Welsh lamb, Welsh lapwings, Welsh carbon or Welsh water.

“I know that it is easy enough to put such principles into words – just as I’m doing now. But no amount of well meaning policy statements shown on Powerpoint slides can ever reveal what a thorough investigation based on hard data and economic analysis can show,” he added.