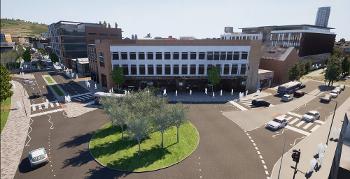 Swansea Council’s £12m programme to transform a key city centre area is due to get back underway on Monday, January 7.

The Kingsway was cleared of construction activity to help shoppers and traders during the Christmas period.

Next week, contractors will be back on site. Shops and other premises will remain accessible.

Council leader Rob Stewart said: “I’m glad that we were able to help shoppers and traders enjoy the festive season by clearing the roadworks for seven weeks; now the work starts again so we can complete the transformation this autumn.

“The Kingsway’s transformation into a people-friendly destination will pave the way for the creation of hundreds of jobs and a green artery for the city.

“It’s the first step in the transformation of our city and will benefit generations to come.”

The Kingsway is being transformed into a city park, incorporating new public areas, with much green space, street trees and enhanced pedestrian and cycling routes. Later this year the existing two-lane one-way vehicle route will become two-way on The Kingsway and Orchard Street, with some neighbouring streets also becoming two-way.

Three zebra crossings on the carriageway now give pedestrians priority when they enter the crossing. The crossings are marked by flashing Belisha beacons – and the council has put up additional signage informing motorists that the crossings are in place. The speed limit is – and will remain – 20mph.

This year’s construction work will include the creation of the new public spaces, including a new “pocket park” at the top of Princess Way, with around 200 trees being planted over the life of the Kingsway project.

This major tree planting operation, in the latter stages of the project, will result in increased biodiversity and a net increase in the number of trees.

Cllr Mark Thomas, cabinet member for environment and infrastructure management, said: “We continually review all works in liaison with the public, traders, contractors and other stakeholders such as utilities companies – and that engagement activity will go on.

“We thank the public and businesses for their patience during this period of transformation. We can already see improvements to the shape of The Kingsway and we plan a digital village office development on the former Oceana site, with a new pedestrian link through to Oxford Street. A great deal of new city centre accommodation is being created nearby – and work is due to start soon on Swansea Central Phase One, including our 3,500-seat digital arena.”

Russell Greenslade, chief executive of Swansea Business Improvement District (BID), said:”Christmas and the run-up to the festive season is such an important trading time for our city centre businesses and it is important, for the continued vibrancy of the area, that we do all we can to support its activities.

“So it was fitting that the important regeneration work was paused, to allow for normal trading activities to continue.

“I know our Swansea BID Businesses are looking forward to welcoming the positive changes that the regeneration will enact upon our city centre and to enjoying its long-term benefits.”