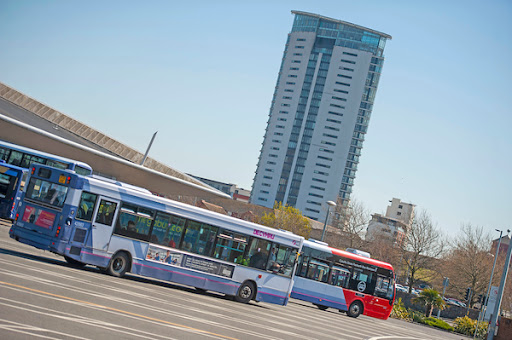 A TEENAGER who has been told by a judge he has ‘major problems in terms of sexual attitudes’ towards young girls has been spared jail.

The court heard how Mason made obscene comments and sexually assaulted a woman in her 30’s at a busy bus station.

At the time of the assault, Mason was already being investigated for a string of sexual offences on teenage girls.

Spared jail due to his young age, the court heard how Mason has ‘major problems in terms of sexual attitudes’ about young girls, older women and even including his own mother.

The judge told the defendant his attitude towards sex’causes him a great deal of concern.

The court heard how the ttenager approached a lone female passenger in the Quadrant bus station in Swansea City centre, last October.

Prosecuting, Ian Wright told the court how initially Mason engaged in conversation with the female, talking about the weather.

However he soon turned to sexual matters – asking the victim about sexual preferences towards a passer by and whether she wanted to have sex with her.

The woman left the bus station and rang her mother to collect her.

Ian Wright, told the court how on the day in question, CCTV from the station shows Mason approaching a number of women throughout the day.

The court heard a victim impact statement, it told how the woman was left a ‘wreck’ after the experience. How she has been left feeling anxious going out alone and reluctant to return to the station for fear of meeting her attacker again.

Mason was already being investigated for sexual offences during the time of the assault. Police were investigating claims that Mason had sent indecent images of his himself on the social media messaging app, Snapchat. The court heard how Mason had allegedly sent the images to girls between the ages of 12 and 13 including live-streaming sexual acts of himself to another young girl and enticing her to engage in sexual activity.

The court heard how Mason also had incestous feelings towards his own mother after he had spoke about her in sexual terms with one of the girls.

At the time of those offences Mason was between the age of 17 and 18, and the offences only came to light after the young girls had spoken to their teacher about the conversations.

Mason had no previous convictions.

Judel Paul Thomas QC told the defendant that had he been older he would be starting a substantial prison sentence – stating his age was a major factor in the sentencing, adding: “If I were to send you to prison it may entrench your deviant sexual attitudes – you may emerge no better and probably much worse.”

The Judge was told how offenders of Mason’s age had no sexual offenders course eligible to them.

Mason was sentenced to a three year community order and was made the subject of a sexual harm prevention order for five years. The defendant will also be a registered sex offender for the same duration.

A restraining order was issued, banning Mason from approaching or contacting the victim.

Failure to adhere to the community order, not working with probation or committing any offence in the next three years will result in Mason being brought back to court and sent to prison, warned the Judge.

Artists in Residence to explore shared heritage between Pembrokeshire and Wexford