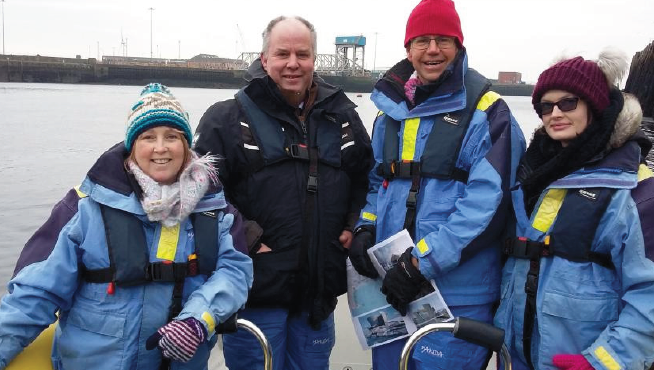 WELSH CONSERVATIVES have praised the ‘transformational’ potential of the proposed tidal lagoon in Swansea Bay, following a visit to the site of the proposed development last week.

The Leader of the Welsh Conservatives, Andrew RT Davies, and South Wales West AM Suzy Davies were taken on a boat trip around the bay on Friday (Feb 10) to explore the site of the project and to discover its potential to make Wales world leaders in renewable energy generation.

It follows the publication of an independent review, which backed the £1.3bn project. Welsh Conservatives have consistently backed the tidal lagoon, and welcomed the Hendry Report.

However, it is worth noting that this backing becomes decidedly more equivocal with increased proximity to Westminster. Responding to the Hendry Report, Secretary of State for Wales Alun Cairns described it as a ‘comprehensive report’ which sets out ‘both the opportunities and challenges’.

“We now need to study this report and decide how tidal lagoons could contribute to the nation’s energy needs both in Wales and the rest of the UK,” he said.

His predecessor, Stephen Crabb, was also wary of committing too publicly to a development then- Prime Minister David Cameron said enthusiasm was ‘cooling’ for. “What we want to do is take a considered decision about whether it is in the best long-term interest in terms of energy, in terms of jobs and the economy,” he told the BBC in 2016, while claiming he was still a ‘fan’ of the development.

However, following his return to the back benches, Mr Crabb gave the scheme his public backing. In a Westminster Hall debate, the Conservative MP for Preseli Pembrokeshire said: “This can’t become another third runway decision where industry makes repeated calls for a government only for it to be kicked further down the road. There is too much at stake on this occasion.”

Mr Crabb added that ‘a myth of unaffordability’ had grown up around the vision of tidal lagoons, and claimed that a minister had told him that the project was ‘eyewateringly expensive’.

It was ‘embarrassingly clear’ that minister did not understand the project at all, he told MPs.

It is now hoped that the UK Government will give the green light.

Commenting after the visit, Mr Davies said: “I am as convinced as ever that this transformational project needs to go ahead, and I’m hopeful that the findings of the Hendry Review will be the spur needed to take this project forward.

“Tidal energy holds great promise to be the most reliable and resilient source of green energy available, and the Welsh Conservatives have been supportive of this ambitious scheme since day one.

“I look forward to this project being taken forward by the UK Government.

“We have an opportunity to lead the world in the generation of non-carbon, renewable energy, whilst providing a boost to the whole of the Welsh economy in terms of jobs and investment.”

South Wales West AM Suzy Davies said: “It was wonderful to have the opportunity to visit the proposed site of the tidal lagoon.

“There is a great deal of excitement about the prospect of the first one being located in Swansea, because it has the potential to propel Wales to being global pioneers in the application of this ground-breaking technology.

“The benefits to local jobs, the economy and the future energy needs of Wales, the UK and wider world of this technology are potentially massive and I will continue to push for this project to become a reality.”

Mark Shorrock, Chief Executive, Tidal Lagoon Power, said: “Andrew, Suzy and the Welsh Conservatives have been with us every step of the way – even on a freezing February morning on the Bay! We very much look forward to now making the transition from development to delivery of a world first infrastructure project for Wales.”