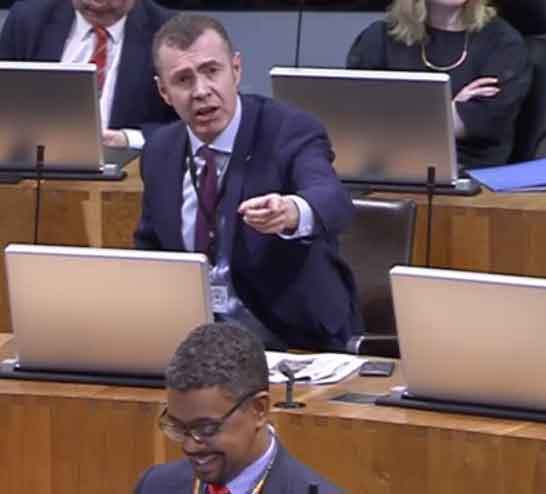 LOCAL AMs have expressed strong reservations about the confidentiality and security of their communications with Hywel Dda UHB.

Their concerns have been sparked after bitter recriminations following First Minister’s Questions on Tuesday, January 30 (see our News section), when information regarding communications between the Board and Adam Price AM were used by First Minister Carwyn Jones in a clumsy attempt to smear the Carmarthen East and Dinefwr representative. That information had been provided to the First Minister by the Health Board.

The Herald understands that following communications between the Board and Mr Price’s office on Tuesday afternoon, the Health Board’s Chief Executive, Steve Moore, met with Mr Price at the Senedd building in Cardiff where an explanation was sought for the disclosure of communications information to the Welsh Government.

At that meeting, Mr Moore was confronted with evidence of communications between the AMs office and the Board in which meetings had been requested.

That information either was not provided to the Welsh Government or the First Minister has been caught out playing fast and loose with the truth.

A spokesperson for Shadow Health Secretary Angela Burns told The Herald: ​”​In light of the concerns raised in Tuesday’s First Minister’s Questions Angela has written formally to both the Health Board and the Welsh Government seeking assurances over the use of her communications.

​”​She is very conscious of the confidentiality of patient data and considers there to be a principle at stake in this matter​.”​

Meanwhile, Simon Thomas AM expressed his concerns in questions to the Leader of the Assembly, Julie James AM on Tuesday.

Amid barracking from Labour AMs, who regard the use of information held on others by public bodies with an equanimity they do share when it comes to their own communications, Mr Thomas said that he had serious concerns on joining a proposed cross party group to discuss a transformation agenda with the Health Board: “I have serious concerns now to join any such group, knowing that what I say, and what I e-mail them, will be revealed to the First Minister, and will then be used as political attacks on me in this Chamber.”

The Plaid AM, continued: “Is there a protocol regarding the way health boards deal with Assembly Members looking at serious reconfigurations of hospital services in their area? If such a protocol does not exist, will the Minister—the Cabinet Secretary concerned—ensure that such a protocol is in place, because, without such a protocol in place, I do not feel I can engage with Hywel Dda?”

Mr Thomas’s disquiet echoed that of Elin Jones, the Assembly Presiding Officer and Ceredigion AM, who commented from the chair earlier in the day that she would not want information of communications between the Health Board disclosed or used in such a way.

As it stands, Adam Price and his Westminster colleague Jonathan Edwards are in talks with lawyers regarding the Health Board’s conduct.

Legal advice sought by the Plaid Cymru AM notes that the health board is may have breached Mr Price’s data protection rights, and those of his parliamentary colleague, Jonathan Edwards MP.

Speaking after the exchange, Adam Price AM said: “The First Minister’s actions during today’s questions session bring his office and his Government into disrepute. His comments in the Chamber today are factually incorrect, and the First Minister has therefore misled the Assembly.

“It wasn’t that long ago a Welsh Government Minister was sacked for trying to access information that could have been used for political purposes to discredit political opponents. On the face of today’s exchange it would appear the First Minister and/or his team have tried to do the same thing. This is clearly a breach of both the Civil Service and Ministerial Code.”

Mr Price continued: “The legal advice I have been given notes that Hywel Dda Health Board is potentially in breach of the data protection rights granted to myself, my parliamentary colleague Jonathan Edwards, and our staff members.

“At my request, the Chief Executive of the Health Board came to Assembly to meet with me this evening in which I presented evidence of correspondence between our offices and my requests to meet with him.

“In an endeavour to restore trust I am sure the Health Board will now wish to correct the record.”

Adam Price’s parliamentary colleague, Jonathan Edwards MP for Carmarthen East and Dinefwr added: “This is the latest reminder that there is something rotten at the core of this Labour Welsh Government.

“Either they are soliciting information from a independent health board for political purposes, or the health board has been compromised in a manner which sees it comfortable referencing correspondence between elected representatives.

“The First Minister’s claims that Adam Price and I ignored Health Board requests for are meeting are manifestly untrue and we have written evidence to prove that.”

The Herald asked the Board whether it had provided details of communications between it and other AMs to the Welsh Government.

At the time of writing, the Board has failed to answer either that enquiry or a request for a statement from its Chief Executive explaining the Board’s role in feeding – possibly selective – information to the Welsh Government.