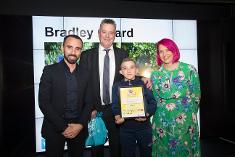 Now the winners are looking forward to a range of prizes tailored for each of them to encourage them to continue to realise their ambitions.

Collecting an award was another teenage fundraiser Skye Edgecombe, who overcame leukaemia two years ago and is now an ambassador for the charity LATCH and a prolific fundraiser in her community.

Also a wined this year, collecting a group award winner is the Diamond Project, a group of children who have overcome barriers to education and are seizing opportunities to realise their potential in collaboration with Swansea University.

The annual High 5 Awards aim to recognise inspirational stories of young people in Swansea who have faced-down the challenges life has thrown at them and gone on to make the most of their skills and talents.

This year more than 130 young people were nominated as individuals or as part of groups by schools, friends and Swansea Council staff who witnessed their effort and determination to succeed.

Leon said: “We are enormously grateful to all the nominators for sharing such amazing stories of children and young people who individually or as part of a group or class have worked so hard.

“I’ve been the High 5 Ambassador since the start. Every year I’m amazed, moved and humbled to see and hear untold stories of young people making the best of their lives or making life better for others despite challenges in their way.

“Their stories inspire me and, I’m sure, they inspire those around them.”

His co-host at the awards at the Liberty Stadium was Siany from The Wave who is the other ambassador of High 5.

Phil Roberts, Chief Executive at Swansea Council, said: “The High 5 awards have become a fixture of the Swansea calendar because the young people’s stories speak of determination, ambition and values we can all aspire to.

“As one of the judges I can say it is very hard for us to choose winners because there are so many young people nominated who deserve recognition for their achievements.”

All High 5 winners receive awards on the night and prizes that are tailored to their individual interests.

Students getting it sorted in Swansea with recycling